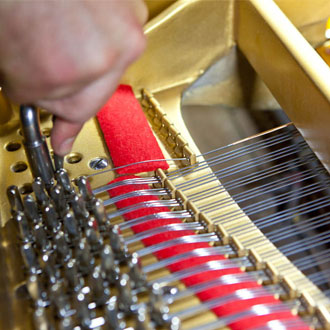 No piano restoration or piano rebuilding would be complete without a new set of bass and treble strings. Piano strings, which are basically steel wire, have a limited useful lifespan.

Over the course of time, piano wire (string) tends to experience two significant changes. The first is a loss of elasticity. Most of us do not think of piano strings as being elastic, but they are. A steel wire losing elasticity is best likened to stretching a rubber band between two points for an extended time period. After this extended time period, you remove the rubber band, and the band is simply not as “stretchy” as it once was. The same is true of piano wire (strings).

The other change experienced by piano wire is caused by oxidation. Depending on the environment, the effects of oxidation may be more or less obvious—but they are still there. Oxidation is commonly called “rust”, but oxidation can appear in various forms. Most often, we see black “gunk” on the wires. This is the beginnings of oxidation.

Other times, the appearance of a typical “rust” is very visible—especially around the tuning pins and wire coils, as well as where the wires turn around or terminate at the hitch pins.

Both loss of elasticity and oxidation will result is less than pleasing experiences for you and your piano.

Extreme cases of oxidation (rust) actually make the wires prone to breakage, which can prevent the tuning of the piano to standard pitch—at least without breaking the string. Loss of elasticity—and flexibility— of the wire hinders its ability to vibrate as it should, which in turn, limits the tone and sound capabilities.